Home → Metro Elevator In The News... → Why Ride The Pink Elevator?

Why Ride The Pink Elevator? 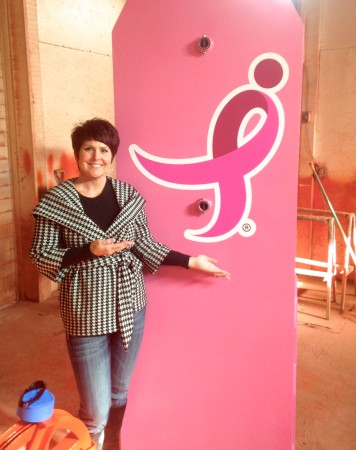 It was an innocent enough thought at the time, “I wonder what would happen if we painted them pink and turned them into good will ambassadors?” Metro Elevator’s Executive Vice President, Roger Brummett spoke aloud as he was watching Metro’s paint professional, Dave Picot painting one their  hoists.

Brummett was trying to conceive a way to further distinguish Metro Elevator as a brand and do something unique to differentiate itself in the hoisting and lifting industry nationwide. Brummett and Metro CEO, Charlie Ernstes, had tossed around many ideas to grow the Company’s name recognition. With much success in sports sponsorships, including sponsoring an Indy Car in the Verizon Indy Car series, and a corporate sponsor for the Indianapolis Colts in their hometown of Indianapolis, Indiana. However, they wanted something more, they wanted to be known for making a difference beyond a construction project. The two discussed the idea of a pink elevator and the potential for it to raise awareness and funds on behalf of breast cancer research. Both men had friends and relatives that had also been affected and thought that such a cause as helping to find a cure for breast cancer would be a worthy endeavor.

The Thought Becomes An Idea Worth Looking Into

Brummett suggested they reach out to the local affiliate office of Susan G. Komen®, and he was introduced to the local Director, Natalie Sutton.  Several conversations ensued and after witnessing Metro’s capabilities and enthusiasm for the idea.  Natalie was convinced it was worth pursuing. And the idea of “Ride The Pink Elevator” began to evolve. Then something very serendipitous happened that seemed innocuous at the time that sent everything spiraling into orbit. Executive VP Brummett met with Ms. Sutton at Komen’s Indy office when she mentioned an upcoming “Pink Tie Ball” at a facility near the Indianapolis Motor Speedway.  Brummett asked Ms. Sutton if she was aware of Metro Elevator’s involvement with Indy Car, and she lamented she wished she had known sooner because she would love to have an Indy Car driver as a celebrity guest for the gala. Ironically, the day before, Brummett and CEO Ernstes had a lunch meeting with female race car driver Pippa Mann about sponsorship opportunities for the upcoming Indy 500, and it immediately occurred to Brummett she might be available to attend the gala. Four days later, Ms. Mann, attended the Pink Tie Ball in Speedway, IN and became acquainted with a number of Komen representatives. That encounter ignited a new discussion that led to Pippa Mann qualifying an all pink Susan G Komen car for the Indianapolis 500. Attending that race on behalf of Komen was Director of Corporate Relations, Carrie Glasscock, Director of Major Gifts, Lynn, Sellers and the founder of Susan G. Komen, Ms. Nancy Brinker. It was in that weekend that Metro representatives were able to interact with these three key individuals about ‘Ride the Pink Elevator,’ and Founder Brinker was able to put her personal encouragement behind the idea. “I think it is fantastic and unique and could potentially be very exciting for us.” 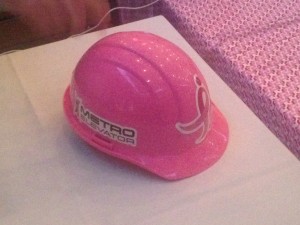 Ride the Pink Elevator was on its way to being launched.

A full time campaign director, Rachelle Brown, was hired by Metro to manage the mechanics of the program. Brummett and Brown then began to introduce the idea to Metro’s customer base with high hopes for participation, but little did they know just how enthusiastically the idea would be received.

How Does Metro’s Ride the Pink Elevator Program Work?

Metro partners with a General Contractor to provide a pink construction hoist for a project. They further agree to engage all subcontractors and suppliers on the project to raise funds on behalf of Komen during a portion of that projects life cycle. Metro provides the General Contractor with the fund raising materials and guidance necessary for a successful fund raising campaign. All participating contractors, sub-contractors and suppliers agree to engage their respective employees for pledges based on the number of revolutions the pink elevator will make during the fund raising portion of the campaign. Participants can pledge any amount of money per revolution, and they can also cap the total contribution to Komen they are willing to make. It is all voluntary, there are no minimums or maximums, and each contractor and sub-contractor and their employees can participate. Metro engages the resources of the local Komen affiliate in the city where they are placing the pink construction hoist, and the affiliate assists them with publicity and public relations events surrounding the project. The entire program is turn-key for the General Contractor and makes it easy to engage participation. 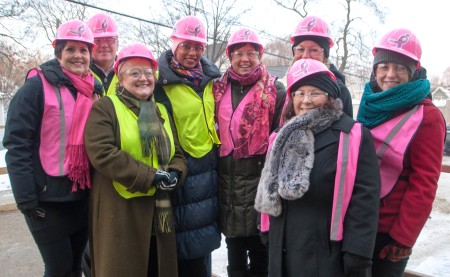 Rob Williams, the Project Manager for Clayco, Inc., at 618 S Main Street, in Ann Arbor, Michigan said this about their willingness to become involved in the inaugural Ride The Pink Elevator campaign; “They (Metro Elevator) have been great to work with and they have made it both fun and easy to participate in such a worthy endeavor. They are truly experts in their field and they are not only providing a valuable service to our project, the have united all of the participating companies working here in a very meaningful cause.” Metro is capturing interest from other companies around the country as well. Pink elevators will soon be adorning the skyline of downtown Louisville, Kentucky with Whittenberg Construction on the new Aloft Hotel. Other projects are being negotiated for Indianapolis, Savannah, and Atlanta, Georgia, and in Mount Pleasant, Michigan with a project at Central Michigan, University. Metro’s President, Charles Ernstes, expressed, “I am thankful, excited and amazed that the Ride the Pink Elevator campaign has taken off on the level it has”. It has been an invigorating awakening, beginning with thoughts of doing a one-time fundraiser here in Indianapolis, to now getting calls from all over the United States asking for our Pink Elevators. We truly appreciate the opportunity to work with and help fund such a worthy cause for something that affects 1 in 8 women in the U.S, and with an organization that is working to improve the health and well-being of women around the world.” Ernstes, Brummett, and Brown are excited about the rapid ‘pinkification’ of these major construction projects and the enormous good they hope to do on behalf of Susan G. Komen. “This has been so much more than I ever hoped for and a lesson in what happens if you decide to dream big and think a little bit outside the box. It’s no longer just about making money, we are making a difference in the lives of people impacted by this dreaded disease and it has changed our company’s culture for the better as a result.” shared Executive Vice President, Brummett. For more information on Ride the Pink Elevator, contact Rachelle Brown, Manager of Marketing and Public Relations at rachelle@metroelevator.com, or feel free to call her at 317-562-9833.