The employees at Metro Elevator located in Indianapolis, IN will be cheering on race car driver, Pippa Mann, at this year’s Indianapolis 500 on May 25th. Like Pippa, Metro is promoting breast cancer awareness through the Susan G. Komen Foundation.  While Pippa will be driving a pink race car, Metro will be erecting as many pink hoists as possible in major metropolitan areas throughout the U.S.A.  Metro’s first pink hoist is expected to begin operation around May 19th in downtown Cincinnati Ohio. 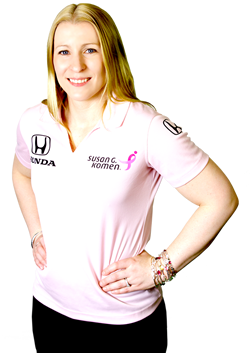 Pippa will be with Dale Coyne Racing for the 2014 Indianapolis 500 and will drive car 63.  This will be Pippa’s third Indy 500 appearance. From Opening Day thru Race Day on May 25th at the Indianapolis Motor Speedway, Pippa’s car, helmet, firesuit and more will be turned pink, in an effort to raise funds for the Susan G Komen foundation. 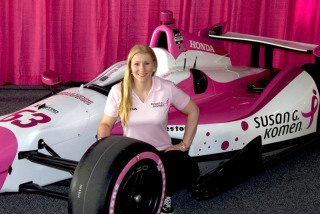 For every lap Pippa completes throughout the month of May, fans and supporters will have the opportunity to make a donation via the her dedicated site.  Click the button below if you would like to make a “per lap pledge” for breast cancer awareness through the Susan G Komen foundation.

In 2010, racing driver Pippa Mann became the first female in history to win an Indy Car pole position,  and the second woman to win an Indy Lights race. In 2011 she became the first British female to race in the Indianapolis 500 and in 2013, Pippa was voted one of the top five most popular IndyCar drivers. Pippa is now in partnership with Susan G. Komen, Pippa will return with Dale Coyne Racing for her third appearance in the Indy 500. So race with Pippa this May, as #PippaGoesPink to take on the greatest spectacle in racing, and in doing so hopes to contribute to victory off the track, as we race to end breast cancer.