Metro Elevator, a 47-year old company, originally owned a fleet of orange construction elevators, until one day, when their Executive Vice President, Roger Brummett, walked by the painting crew as they were complaining about the selection and quality of the color.

“Paint them whatever color you want,” he said. As he walked away, he stopped and turned abruptly and said, “What if we painted them pink?” 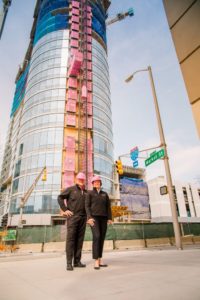 The question opened up possibilities and led to a new philanthropic marketing campaign with the end result of painting their entire fleet of elevators pink. Rachelle Brummett, Marketing & Public Relations Manager for Metro Elevator, partners with the general contractors on their job sites to create their socially conscious event promoting breast cancer awareness. 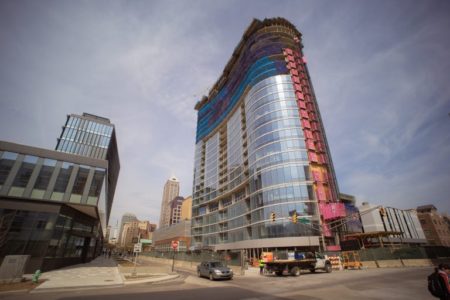 “This program makes sense to the companies for their culture and our fundraising campaigns across the country benefiting local Susan G. Komen,” says Rachelle, who has worked on all of the Komen, Metro Elevator campaigns.

Both Roger and Rachelle have grandmothers who died from breast cancer. Rachelle serves on the Pink Tie Ball committee, which will be held on Sept. 16. Roger has been a Pink Tie Guy in two states: Michigan and Indiana. Once they connected with the local Susan G. Komen chapter in Central Indiana, they were generously connected with Komen nationwide for connecting locally by job site.
The fundraising campaigns begin at peak of construction, with the bulk of the contractors on the site. The contractors have been engaged with a kickoff reception, which includes a ribbon cutting replete with pink hard hats and pink vests. The GCs are invited, as well as local affiliate of Komen. Survivors are invited to speak, and the campaign is open for the following 45 to 60 days, with 100 percent of the donations staying local to that area.

“The money raised stays in the market where we are doing business, and this spring is the first campaign with Susan G. Komen of Central Indiana,” Roger says.
There are about 30 construction elevator companies across the country that do what Metro Elevator does, which is not many for an industry of their size. Their now signature pink elevators have fundraising campaigns across the country benefiting local Susan G. Komen.

At the end of the campaign period, a check is presented by the GC to the local Komen affiliate. Past or existing campaigns have included all states from Michigan to Florida and Alaska. To date, Metro Elevator’s breast cancer campaigns have raised $117,000 nationally for Komen through 12 campaigns. The 360 Market Square building in downtown is the first for Central Indiana.

“When I received a call from Roger sharing that he wanted to paint some elevators pink, I was like ‘wow, cool’,” says Susan G. Komen of Central Indiana Director Natalie Sutton. “I had no idea what a construction elevator was.”
Proceeds go towards Komen’s Bold Goal, which is to reduce the current number of breast cancer deaths in half by 2026. Currently, 40,000 women die per year from breast cancer.

“While women still need access to screenings and mammograms, our shift is on saving lives,” Natalie says. “Our focus is on patient navigation. Once someone receives their diagnosis, a navigator is someone who helps them through their recommended care.”

Metro Elevator’s involvement with spreading awareness to mostly men on construction sites has made an impact with Komen. Now, a new demographic are being educated about breast cancer by being lifted in a pink elevator.
“This is what is great about Metro’s pink elevators — we continually raise awareness, not just during the campaign,” Roger says. “There is a sign inside the elevator which reads, ‘Why is This Elevator Pink?’ which explains the significance.”[/raw]